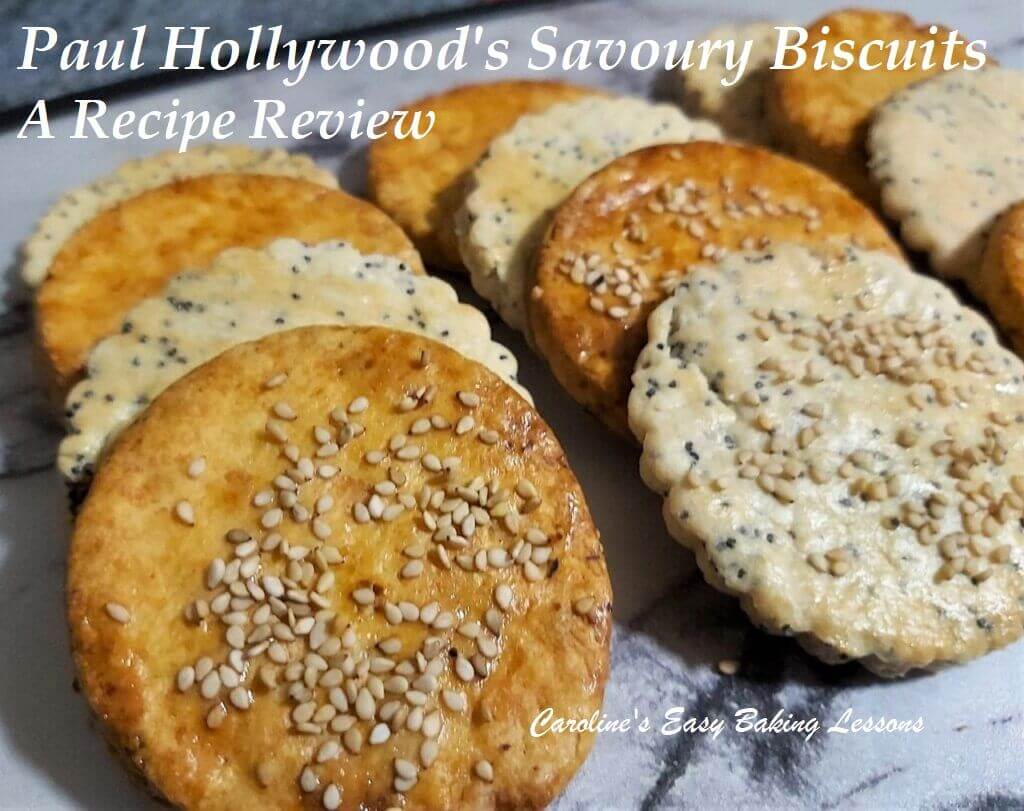 Recently I got a great haul of baking books from 2 charity shops in Scotland.  4 books for £9.50, that is about $11.87.  One was a Michael Roux  pastry book, a really big baking book, a Mary Berry one and a Great British Bake Off one (The Great British Baking Show).  The first recipe I tried was from the GBBO one, ‘Big Book Of Baking’ by Linda Collister (2014).  It was Paul Hollywood’s Savoury Biscuits (what we call cookies in the UK, but in this particular case, used like a cracker).  I have tried recipes from Bake Off books before, but didn’t really like them, so as this was billed as Mr Hollywood’s recipe, I thought it worth a try.

The Process & The Recipe

I made and baked them in the evening, so that we could snack on them, warm out of the oven with some cheese. I was looking forward to them.

So the recipe is simple and straight forward enough, with nothing technical involved. There was only one photo with the recipe, of the end bake and no process photos. The recipe said to use a mixer for the dough, but I couldn’t be bothered moving out my big mixer or even doing it with the handheld electric mixer, as it seemed it would be possible by hand. After all, Mr Hollywood does go on a lot about using your hands in baking!

The recipe makes up 2 different varieties of biscuit: one with poppy seeds and the other with tomato paste and cheese. So you simply make up the dough, half it and add in the flavours.

You were then instructed to roll out the dough and chill it before cutting the biscuits out. However, if I had done as the recipe stated, there would have been lots of scraps and re-rolling to get the required 36 biscuits and the dough will have warmed considerably by that point. So since the dough was ok at this stage for lots of rolling out, I cut out the biscuits and then chilled them before baking.

This allows the dough to rest properly and helps them keep their shape. After chilling 30 minutes, you brush on beaten egg and sprinkle sesame seeds on the tomato & cheese biscuits, and bake till golden.

Now when mixing in the Poppy seeds, I found there was way too much of them and a good amount were sitting at the bottom of the bowl, so I discarded them. Even with that, there still seemed too much, and it seemed to make the dough very dry. So much so that it didn’t come together as well as the other half of of the dough. When rolled out, it cracked a lot. In the end I got 16 poppy seed biscuits and 13 tomato & cheese ones, so giving me a total of 29, compared to the recipes quantity of 36. I thought maybe I had rolled the biscuits too thick, but looking at the photo in the recipe book, some of the biscuits look just as thick as mine.

The first batch baked off at 12 minutes, so within the recommended 10 – 15 minutes. It was hard to tell when the poppy seed ones were done, as they were very pale and I didn’t want to leave the others in much longer. I did add more egg wash during baking, but it didn’t really colour them much.

There was also no note of Fahrenheit oven temperature, or units of measurements in cups, ounces or fl oz, that would have been beneficial for US & Canadian readers, who avidly watch the Bake Off. I found the recipe on-line and there were some ounces noted. I have included full measurements at the bottom of the review, for your reference if you want to try them out.

My Thoughts – How Did They Taste?

So how did they taste? Well the poppy seed ones were extremely bland, even with some butter and a second choice of a cheesy spread, they still weren’t nice at all. So I persevered more with the cheese and tomato ones, thinking they would be better. But they still were missing something, even with toppings. They looked the part, but were really lacking in taste. More salt, pepper and maybe some garlic powder or onion powder, would really have kicked them up a notch. Those who like spice could even add some chill powder.

I think I was expecting them to be like other savoury biscuits I make. One is not really a biscuit or a pastry – my Easy Peasy Smokin’ Cheezee Squares.  See Photo avove. They are so tasty with extra mature Scottish cheese (like sharp cheddar).  I also have another savoury biscuit recipe listed that is my version of Turkish biscuits –Tuzlu kurabiye – Turkish Savoury Biscuits. (See photo).

The regular savoury ones are nice and salty (I am not a fan of salt but these are really good and have a nice crumbly texture too).   So much more worth a try.

So taking everything into consideration, I rate this recipe a 5/10. For someone like Mr Hollywood, the flavour should have been spot on. Especially so as he was giving past contestant Norman a hard time about bland biscuits.

I usually eat savoury biscuits & crackers without any topping, so it’s nothing to do with my taste buds being the problem. In the on-line recipe, it builds these biscuits as buttery, but this really is not the case. There is not enough butter in them for this taste to come through.

There aren’t many things in this house that don’t get snapped up fast, and unfortunately after the taste testing, they are still in a food baggie. And I think that speaks volumes and says it all.

If you need conversions, see below where I have calculated them for you.