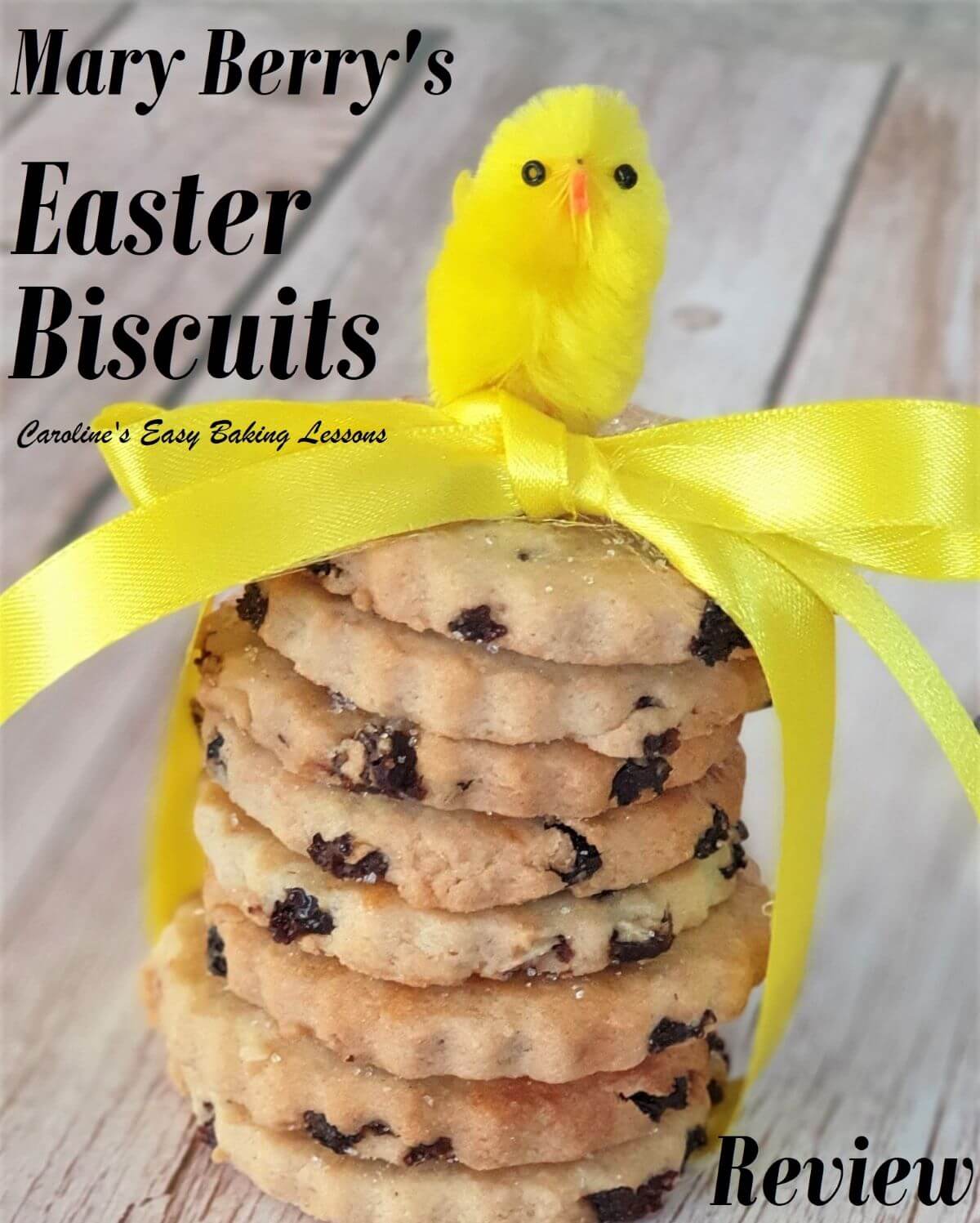 Where To Find The Recipe

This recipe featured on Mary Berry’s program, “Mary Berry’s Easter Feast” on BBC Food . (If you look online you can view it), but it also is listed online on the BBC’s Own Food Website. I tried this recipe out, and wanted to share how good it is.

These buttery lemon biscuits are so easy to make, take little time and also make a lovely gift. It is very straight forward & so an easy bake for beginner bakers.

What Was Missing From The Recipe?

Here is the direct link to go to Mary Berry’s Easter Biscuit recipe on the BBC website. But this does not include measurements in cups, US & Canadian ingredient names/temperature, and also no comprehensive list of equipment, like Caro likes to have on this website. So below, I have added these in red type for readers’ convenience. Also a couple of the conversions for the centimetre to inches was not correct so have added these too later in the review.

The recipe is very simple and straight forward with good instructions. There was however, only one picture of the finished product with no pictures taking you through the process. So I decided to add one to each so you could see how each stage should look. You can use a mixer or your hands. I used a mixer for the creaming stages as my hands are not that brilliant.

Also to soften your butter, make sure it is cubed and soft. You can always soften the butter quicker using this method if you forget – Soften Butter In About 10 Minutes.

When you got to the rolling out stage, Mary said to put the biscuits straight onto a baking tray and put in the oven but I find that if they are put in the fridge for even just 30 minutes, it helps them hold their shape and the dough to rest too.

Preheat the oven to 200C/180C Fan/Gas 6/400f. Mary has you line three baking trays with baking/parchment paper. I always grease the tray/sheet, so that the paper sticks to it & there is no danger of the biscuits falling off when taking them out of the oven. (If your tray/sheet has a lip, this is less likely to happen). I use lining paste for this.

You are next instructed to put the butter and sugar in a bowl and beat until well combined and fluffy. I beat it for 3 mins so that it was really mixed well. Next is to add in the egg yolk and lemon zest and beat until combined. This only takes a couple of minutes. See Photo 1.

Now you sift the flour and I added the Mixed Spice at this stage which wasn’t part of the recipe.  I added it, as it gives it a nice flavour, or you could add cinnamon if you prefer.  (Mixed Spice, is similar to Pumpkin Spice). See Photo 2.

Mary now has you stir in the currants and enough milk to make a fairly soft dough. The recipe called for 1-2 tbsp milk but I started with 1tbsp to begin with so I could feel how the dough was.  You can do this using a mixer but I rather do this using my hands as you get a feel of how the dough should be. I used 1½ tbsp of milk in the end as you only want a soft dough, not too sticky but this may vary, from flour to flour. See Photo 2.

Now you knead the dough on a lightly floured work surface, & don’t overdo the flour or it will affect the biscuit texture.

Next we need to roll the dough out. I like to do mine between two pieces of baking/parchment paper when using a rolling pin. This means you are not adding more flour which will alter the bake and it doesn’t stick to the rolling pin.

Roll out the dough until 5mm (1/5”) thick. For this I used my friend Caro’s tip and marked 5mm on a cocktail stick so you can see the thickness. See Photo 3.

Finally you transfer to the baking trays/sheets using a palette knife. Now the recipe says to put them straight in the oven, but another tip I have learnt from Caro is to put them in the fridge on the baking trays and let them chill for 30 minutes. This helps the biscuit to keep its shape when baking and the dough to rest. The biscuits are then baked for 8 minutes.

You then remove the biscuits and lightly beat the egg white using a fork, before brushing the tops of the biscuits with the beaten egg white. Caster sugar is then sprinkled on top (Extra/Super Fine sugar), before returning to the oven for 5 more minutes, or until pale golden brown and cooked though. The biscuits are then left to cool on the trays for a few minutes, before transferring carefully to a wire rack to cool completely.

The biscuits can be made up to three days ahead and kept in airtight container if they last that long.

The recipe was easy to follow and the baking times were accurate, although sometimes this can alter with different ovens. As previously mentioned the recipe states to put them straight into the oven when you have cut them out but by putting them in the fridge for half an hour, they do keep their shape.

I added mixed spice to the recipe as it just gave them a little extra flavour but you can leave this out if you so wish.  The recipe was easy to read and instructions were good.  It would have been nice to have had a few pictures but the only one was the finished article.  The flavour was good, buttery with a good crisp.

Despite Mary Berry being extremely popular in other countries (the US & Canada in particular), there were no conversions for this, such as ingredient names, cup measurements or oven temperature. I would certainly make this again maybe omitting the currants and mixed spice and making with cranberry and raisins.

So taking everything into consideration, for all of the reasons mentioned above, I would rate this recipe a 7.5 out of 10.

Why not also join Caro’s Facebook group – Easy Online Baking Lessons, dedicated to this baking lessons website, as well as providing one-on-one support with myself & Caro? Be sure to answer all security questions when requesting to join. Click to join the group.