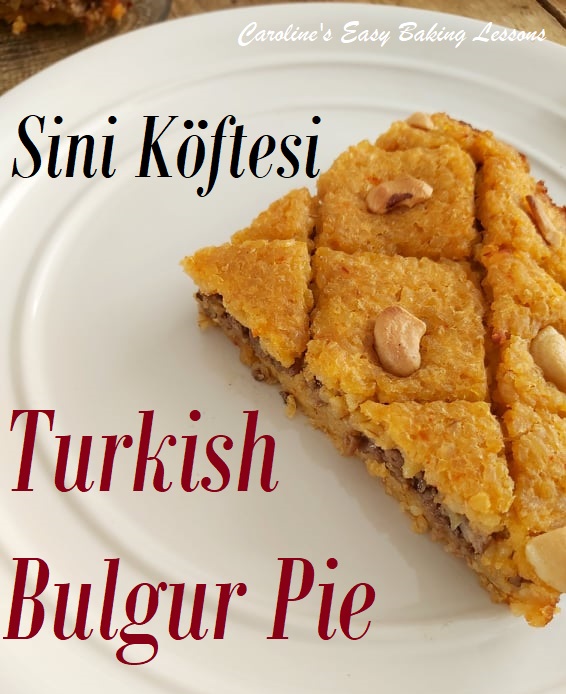 This is my review of a recipe I found on YouTube channel Refika’s Kitchen, by the lovely Refika. This is a Turkish food channel with some videos in Turkish but with English subtitles. She also does some in English too and this is one of them. The recipe is named Sini Köftesi, Kıbbeh or basically a Turkish Bulgur pie. (Pronounced – ‘see-nee coof-te-see, or cub-beh). Bulgur used as the base and topping, in place of pastry dough, and a minced (ground) beef filling. You can also make it using a vegetarian filling.

I made this Turkish Bulgur Pie for our dinner, and a second slightly smaller pie, with a Quorn Mince filling and no spices. Here’s my review on the recipe.

The recipe process is straight forward enough. Now in terms of how the recipe is written on the description section on YouTube, it’s basic. However, you are limited by what you can add there. And, the video is an almost real-time video, so you are seeing all the stages. Refika’s videos are not 1 or 2 minute videos, so you not only get to see the recipe properly, but you also learn some bits of information along the way. Be it about the ingredients, baking/cooking science, or some Turkish history or words. It all lends for an enjoyable video to watch as opposed to the high pace Tiktok style.

The actual process for making Turkish Bulgur Pie is similar to that of making any pie. You make the casing, in this case is made from bulgur (uncooked) and some cooked potato. Along with some seasonings and tomato paste (that gives it what I would call it’s bright happy colour), that is pretty much what it’s made up of. The filling is usually minced (ground) meat and I used beef as well as a Quorn version. This filling is fried till brown, with some onion .

(Point to note too, there was walnuts and Nar Molasses in the filling. I didn’t have any walnuts, and forgot about the molasses. This is Pomegranate molasses and not to be confused with ordinary molasses. It is more of a thinner type syrup and completely optional. For the vegetarian one, I also added some gravy granules, just to give flavour, and also because the Quorn is quick low in fat (if you haven’t heard of Quorn, it’s made from mushroom protein).

Once the filling for the Turkish Bulgur Pie is ready, you are preparing half of the bulgur/potato dough on some cling film/plastic wrap to make a circle of ‘dough’ to place in your prepared baking dish. Point to note too, Refika used an extra large round dish, (30-35cm/12-14″), a typical size for a lot of Turkish baking and I have one.

But, I wanted to make a smaller one with the meat, and an even smaller one still as a vegetarian one. So rather than reduce the recipe for 2 dishes, (for more on reducing a recipe to a smaller dish size, see my article), I went with the recipe amount and used to make the 2 smaller ones

This is then placed in the bottom of the tin and assembled just like any other pie. It’s then marked on the top, nuts added (I used cashews) and baked.

So How Was The Turkish Bulgur Pie?

Well I really liked it. I let it cool a bit and we had with a salad. So nice for hot days. I really liked the taste and texture of the casing and was nice with the filling. The meat lovers liked their one too. I would definitely add nuts, probably cashews to the filling mixture next time.

So How Was The Recipe?

Well as mentioned basic in the written form, (no photos etc.), but excellent in the video. Another good point to note is that the recipe included gram and cup measurements. So ideal for bakers of different countries. The was however, no ounce quantities given.

I didn’t add mince (ground) meat to the dough either. Apart from not being vegetarian, I didn’t want to use that much meat as well as what was in the filling. So might be a bit more rich with the meat added, so just bear that in mind. What I would say though is that you were to bake without a fan oven, for 30 -35 minutes. After 20 minutes not much was happening at all, so I put the fan setting on and in the end it baked at 35 minutes but with the heat 20 degrees higher in effect.

I know the oven temperature of my oven was correct, as I always use two thermometers (also it’s a new oven, and I have to be sure of the temp ?). So some might find that 180c (350f ) without fan, might take longer than the 35 minutes.

The answer is yes. I would make again similar to how I did, but adding cashews into the filling too and maybe even more on the top than before. Might be nice to try some other fillings too. Was nice warm or at room temperature.

How Do I Rate This Recipe?

So taking everything into consideration, as above, I would rate the recipe for Turkish Bulgur Pie an 8/10. In the higher end of my ratings, so you know I liked it. Great way to save on the butter from pastry, and something different to the norm. Might be quite a nice thing to make in large quanties for gatherings too.

Below I will list the ounce and cup measurements for the original recipe, for your convenience. Note I was able to use this amount of ingredients & divide between 2 smaller dishes. I used an 8″(20cm) round tin and also a 6″ (15cm) cake tin, (and used about a 60% proportion for the larger and 40% of the ingredients for the 6″.

But, for the bulgur/potato casing, I had to increase the amount so that I would have enough to completely cover 2 pies. Please see the recipe in the description portion below the video. Just click here to go to the original YouTube video.

I would love it so much if you could sign up for my newsletter. I will send out monthly emails, showing the latest recipes and articles, and latest info. Being a site without ads, building a following, is even more important and will keep it up and running and for free to everyone. Occasionally there will be the odd seasonal emails, but is really a means of reaching you, if you are not already in one of the Facebook groups I admin. Please note too, that these email addresses are not shared or sold onto another party. Thanks so much Caro xxx