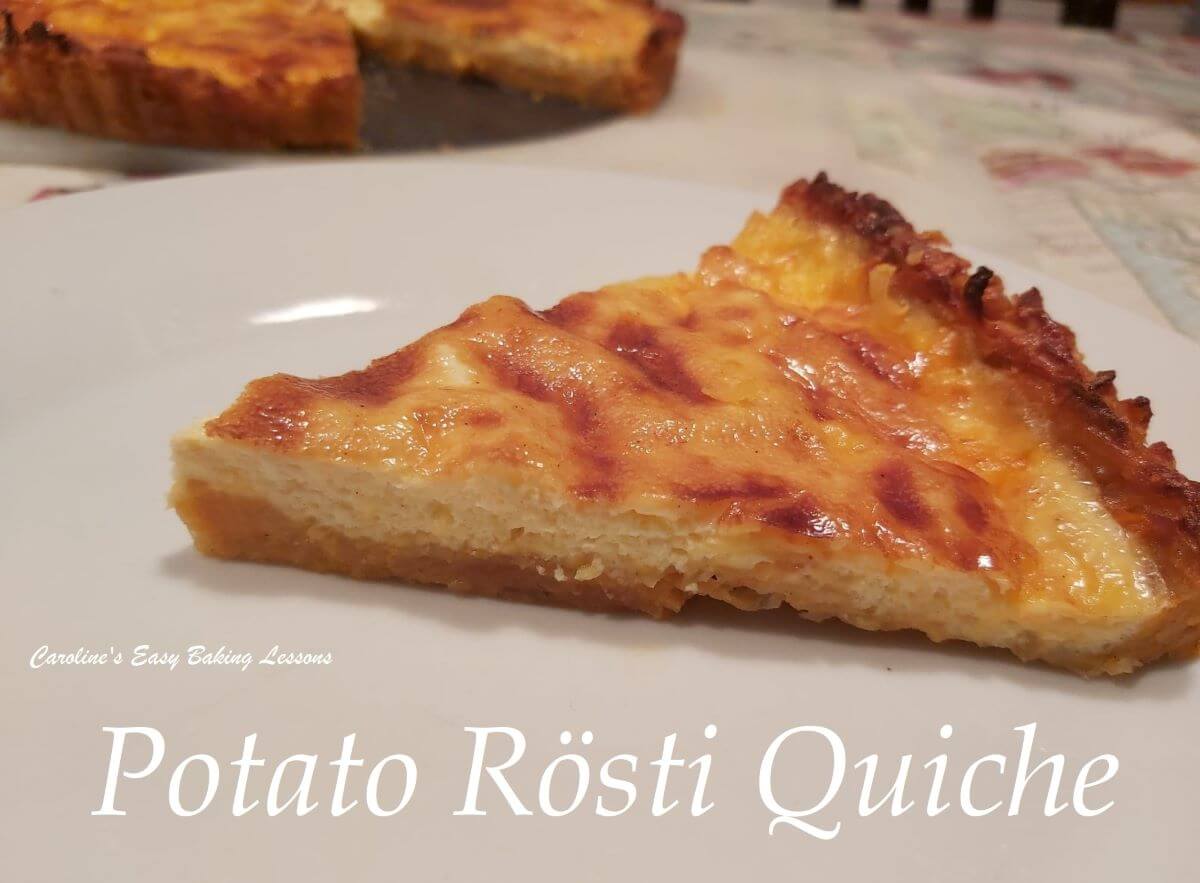 Where I got The Recipe

For Christmas this year, my friend Phil gifted me Nadiya Hussain’s newest book – simply titled ‘Nadiya Bakes’ (Penguin, 2020). I liked Nadiya, who won The Great British Bake Off (Great British Baking Show), in 2015. So this was a perfect gift, and what baking book isn’t right? 🙂

What Is Potato Rösti Quiche?

Potato Rösti Quiche took my eye, and was ideal, since I don’t eat meat and I could just make one meal. The dish is a fusion of traditional cheese quiche with potato rösti. And that simply means making a crust from potato rösti and filling with a cheese, cream and egg filling. The rösti was made using not only white potatoes but also sweet potatoes, giving it a nice colour and a slightly healthier type of carb. So no flour in the crust, making this a great gluten free option.

To make the base you are very simply instructed to grate/shred the uncooked potatoes and then squeeze out as much liquid as you can. Now I have done this before and also for the likes of courgette/zucchini cake, so knew exactly what to do. You place in a clean tea-towel, close up and squeeze as much of the liquid out as you can get. I also then like to place over a drainer or sieve placed on top of a bowl and leave at least 15 minutes as more liquid will come out. And then I give a final good squeeze.

After that you are directed to mix up some seasoning and a small amount of flour (**gluten free flour will work too, or even gluten free cornflour/corn starch). Now I think it should have been more as it barely coated the potato. I also actually brought out lots more potato than I ended up needing because once you grate it, you get quite a lot of volume. Anyway, instead of regular paprika, I used smoked paprika, because it goes well with cheese, we like it and I like it! 🙂 After coating in this dry mixture you add in an egg to bind it all.

Nadiya recommended not using a loose based tin (24cm/9.5″ ) in case of leakage, but I had a loose based tart tin the right size, so lined with a circle of paper and also brushed some lining paste under the paper and up the sides as a means of greasing the tin. (See photo above of how I cut a paper circle, and click under the photo to go to more photos on how to line tins)

The potato mixture is then placed in the tin and spread out and up the sides. I found after evenly doing that, pushing down with the side of the business end of a spoon at the edge to make the side more defined, really helped (giving it a sharp corner if you like, rather than a curve up the side). This is then baked for 25 -30 minutes.

After that you bake for another 5 minutes with egg brushed on top. Meanwhile you prepare you filling. It’s simply eggs, milk, cream, cheese and seasoning. Nadiya richtly used mature cheese (mild cheddar does not have much flavour), but I always have extra mature (like extra sharp cheddar) so used that (and mine was a coloured one). I also did not have whole milk (full fat milk) so used some double cream (heavy cream) instead as that’s what I normally use anyway for quiche.

I would also normally mix in the grated/shredded cheese with the egg/cream mixture, but Nadiya advises to layer the cheese in the potato case first instead and then pour the mixture on top. And the amount was perfect for the tin. I didn’t have any chives so didn’t add those.

It’s then baked for 20 minutes till set with just a little wobble. Mine baked about the right time surprisingly. I had to turn it after half way through though to get an even colouring. See photos of the quiche in the oven when the quiche always rises up high but always deflates once out of the oven.

You were to wait 30 minutes once out of the oven to cool and set up, but my lot were too much in a hurry to eat, so I placed in the fridge after about 10 minutes. And I served with peas and a tomato bulgar I had made. Didn’t want to make a potato salad to go with potato quiche 🙂

How Did It Taste?

Well it tasted lovely. The quiche filling is pretty much what I normally use (apart form milk which I will try another time), and the base was nice. It was soft in the bottom though and particularly hard to get a cut slice out because of the paper I added. It didn’t stick as such, but if you have a 24cm (9.5″) tin that isn’t loose based, don’t bother paper lining it. Just grease it and it should be fine. The crust was crispy and nice and could even have taken more smoked paprika or even some different flavours.

Thoughts On The Recipe

You are advised to par-bake the crust for 25-30 minutes but it didn’t say to what finish what you wanted and I am not sure if that’s why my base was soft. Not in a soggy way but soft compared to the sides. A simple instruction like baking till crispy might have been what was intended. The base did seem quite thick when preparing it. However, once it was baked, it was a nice proportion to the filling.

There were no alternative measurements given, despite Nadiya being very popular in the states. However, the instructions were on the most part straight forward enough.

Would I make again?

I think I would, but not use it instead of pastry all the time. It didn’t actually take any quicker to make this type of crust as opposed to pastry. It would be good for people who don’t like working with pastry or find they over-work it (did you just hear Paul Hollywood in your head? 🙂 and make tough pastry. You could also use for a vegan tart, by using an eggless filling. But it’s still a nice lighter alternative to the pastry version and paired lovely with the tomato bulgar. I did really enjoy my dinner and finished it all (which is unusual for me).

So taking everything into consideration, I rate this recipe a 7/10.

Not my highest given, but still a good recipe worth trying and only the points noted above pulling the score down.

Try The Recipe For Yourself

If you want to try the recipe, here’s a link to the Nadiya Hussain Potato Rosti Quiche recipe that is exactly as in the book. Point to note too, this is a lovely hardback book, with lots of bakes set out in lots of different sections and worth buying.

Please also see below, I have listed the ingredients & temperature for US readers for your convenience. Also see my handy Ingredient Conversion table with cup, gram & ounce conversions.

24cm Round tin (9.5″) If you wan to make in a smaller sized pie dish, check out by guide on how to reduce to the size you have – go to my How To Reduce A Recipe Calculator.