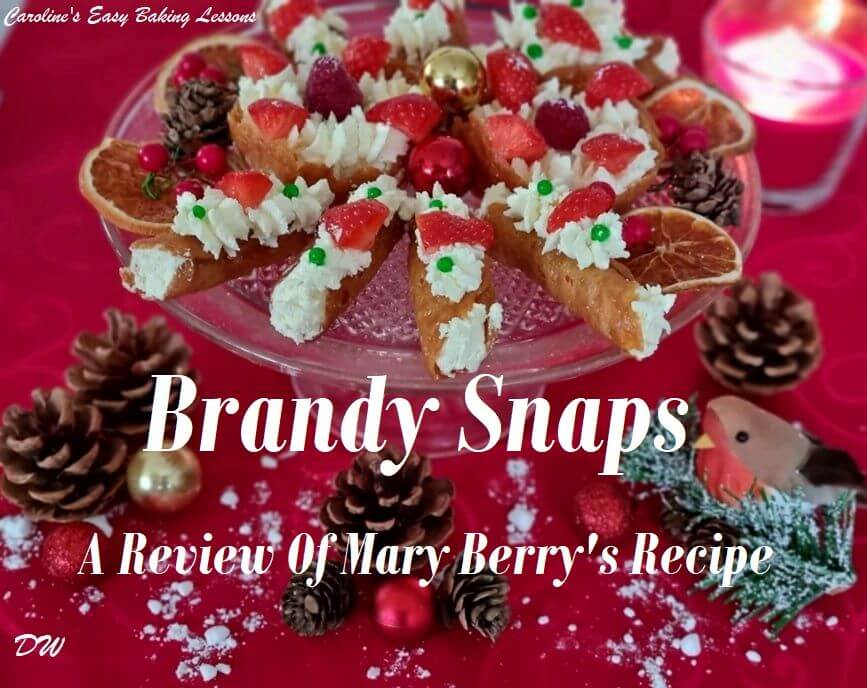 Where To Find The Recipe

Before we move onto the recipe instructions just a few words about the ingredients.

The recipe only lists the ingredients in grams and ounces, with no cup measurements for US or Canadian bakers.  And we know they LOVE Mary Berry and her recipes! I noticed too that the book version of the recipe used double the amount of ingredients. (More on that later).

Golden Syrup & Where To Buy

Point to note too, this recipe uses Golden Syrup. This should not be confused with Corn Syrup or Dark Corn Syrup. Caro often uses Golden Syrup and another popular British ingredient, Black Treacle, in her recipes, including her Gingerbread Cake.

The sweet recipe lesson no. 3, Gingerbread Recipe lists where to buy Golden Syrup in the states & Canada. So check that out above.

This recipe uses Demerara Sugar which is a light brown cane sugar with large crunchy crystals and a tasty caramel flavour. If you don’t have Demerara Sugar, then another option is to use Golden Castor Sugar or Dark Brown Sugar in its place.

In the case of this recipe, the sugar is dissolved, so it’s more about the taste coming from the sugar, rather than the size of the sugar.  See my photo of UK Granulated sugar, compared to Demerara sugar, & the 3rd sugar is actually Dark Muscovado Sugar (not Dark brown Sugar).  Dark Muscovado could even be used in this recipe. (In the UK, you can buy the Demerara & Dark Muscovado cheaper in Aldi).

For more on UK sugars, see my Differences Between UK & US Baking Ingredient article.

The recipe asks for you to line a baking tray/sheet with baking/parchment paper. No equipment list, or measurements given so I used a baking tray 13” x 9”  (33x23cm), as you need a good size as the mixture spreads.  That said, American ovens are much bigger than ours in the UK, so I would say this is actually about the size of a ¼ Sheet Pan.

The recipe asks for you to add the butter, sugar and syrup into a heavy based saucepan.   It can be a non-stick pot, as you are not going to heat the mixture to a high temperature like you do when making caramel. You need to make sure you heat it over a gentle heat which takes about 15 minutes, making sure the sugar and butter have dissolved completely.  You have to remove the pan from the heat and let the mixture cool for 2-3 minutes before adding the sifted flour, ground ginger and lemon juice. Stir it really well, and leave to cool for about 10 minutes.

It goes on to say to place a teaspoonful of the mixture onto a large baking sheet.  I left 4” (10cm) in-between them as they spread a lot when cooking.  Just like the recipe said, I only did four at a time, and this is because you have to be so quick when they have baked as the mixture quickly hardens. They say to bake for 10-15 & mine took 12 mins. They should be golden brown and lacy in appearance.

The baked mixture needs to be just firm enough to remove, but pliable enough to shape. Use cooking spatula to gently lift them off the paper and then mould them round the end of a wooden spoon or bottom of a glass. If the mixture in the pan becomes too hard you can roll a teaspoon worth, into a small ball and put on the baking tray/sheet and slightly flatten it with your fingers.

I used 2 long handled greased wooden spoons so I could do the four all at one, but if they started to harden you could quickly place them back in the oven for a minute so you will be able to mould it easily. With the bandy snap basket, I greased the bottom of a glass and moulded the brandy snap over the bottom and fluted them with my fingers. When they have cooled and hardened, I gently remove them from the wooden spoon and put them on a cooling tray along with the baskets. I left mine for 10 mins as they harden quickly.

What I Thought Of The Recipe

I was very pleased with the final result, and taste. But I felt there was a lot missed off the recipe. No American or Canadian measurements were given nor what size baking tray/sheet to use.

On comparing this book version of the recipe, to what is listed on Mary Berry’s website, there were several differences. The on-line version is coming from her other book – Baking Bible.

The first noticeable difference was the quantity of ingredients called for. The online version used half the ingredients, so would make half the number of Brandy Snaps.

How Much Does It Yield?

Which leads me on to the quantity it yields. The book recipe, states 30 Brandy Snaps. I can get 14 Brandy Snaps and 4 of the bowl/basket style. But if you were to make all as the traditional Brandy snap tube shape, I would imagine you wouldn’t get any more than 22. So, quite short of the 30 the book states. Now obviously the bigger you make them, the less you get. But, the recipe, in the book or online, doesn’t say what size to make the disc of batter.

But the differences between the book and online version, don’t stop there.  There were more than a dozen I counted.  Many including useful information and tips.  So rather than me list them here, I suggest you refer to both recipes before making these Brandy Snaps.  And it was the online version had more information.

Another way to do the baskets is to mould them over an orange which I may try next time only found this when looking at another recipe.

The Brandy Snaps will keep for a week in an airtight tin.

Based on the taste and if you use the online version, in addition to the book recipe, I would rate this recipe a 7/10.

Be sure to check out Caro’s conversions of the ingredients into cup measurements. She hand-measures all these, as Google is often inaccurate or inconsistent. For more conversions, see her Conversion Of UK & US Common Baking Ingredients article with a handy table.

We use cookies on our website to give you the most relevant experience by remembering your preferences and repeat visits. By clicking “Accept”, you consent to the use of ALL the cookies.
Do not sell my personal information.
Cookie settingsACCEPT
Manage consent

This website uses cookies to improve your experience while you navigate through the website. Out of these, the cookies that are categorized as necessary are stored on your browser as they are essential for the working of basic functionalities of the website. We also use third-party cookies that help us analyze and understand how you use this website. These cookies will be stored in your browser only with your consent. You also have the option to opt-out of these cookies. But opting out of some of these cookies may affect your browsing experience.
Necessary Always Enabled
Necessary cookies are absolutely essential for the website to function properly. This category only includes cookies that ensures basic functionalities and security features of the website. These cookies do not store any personal information.
Non-necessary
Any cookies that may not be particularly necessary for the website to function and is used specifically to collect user personal data via analytics, ads, other embedded contents are termed as non-necessary cookies. It is mandatory to procure user consent prior to running these cookies on your website.
SAVE & ACCEPT