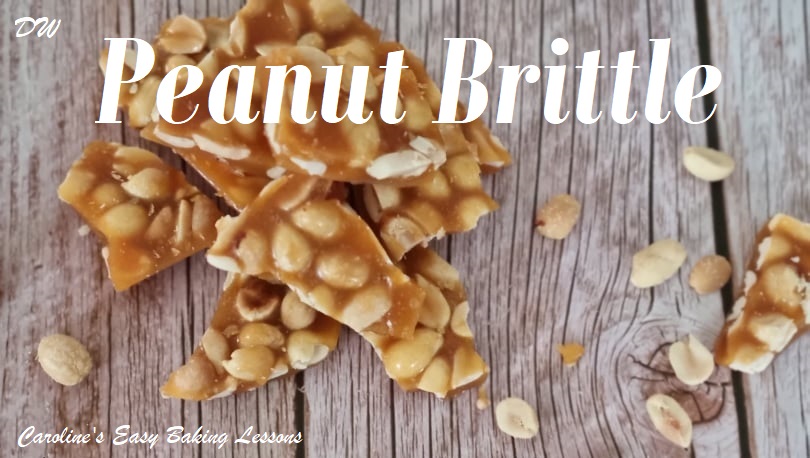 This is a review of a recipe for Peanut Brittle from the Tate & Lyle’s Golden Syrup Recipe. I had been trying to find different recipes that could make little gifts for Christmas, also this was my mum’s favourite sweet too. Having never made it before I thought I would have a go and I was really pleased with the end result.

Well What Did I Think Of The Recipe And Instructions?

Before we move on to the recipe instructions, just a few notes on the ingredients for the Peanut Brittle. The recipe only lists in grams. No ounces or cup measurements for US & Canadian readers, who are big fans of Golden Syrup. ( ***Don’t miss my table further down for ingredient conversions).

Golden Syrup & Where To Buy

Point to note too, this recipe uses Golden Syrup. This should not be confused with Corn Syrup. Caro often uses Golden Syrup and another popular British ingredient, Black Treacle, in here recipes, including her gingerbread cake. The Gingerbread Recipe lists where to buy Golden Syrup in the states & Canada.

The recipe also calls for Tate & Lyle Fairtrade Golden Caster Sugar. I didn’t have that, so just used regular white Caster Sugar.  The equivalent in the US is Extra/Super Fine Sugar. You can make your own Caster sugar by simply grinding granulated sugar just a little, using a food processor. Note too that US granulated is slightly smaller a granule size than our granulated sugar. So don’t grind too much or you will make Icing/Powdered sugar. See Photo above of the 3 main sugars we use in the UK.

The instructions ask for you to add the butter, water and caster sugar into a pan on a low heat and continue to stir until the butter has melted. What it doesn’t mention in the recipe, is that it should not be a non-stick pan. You need to be careful with using a non- stick pan because high temperatures can ruin the non-stick coating and can release toxins into the food.  So if you have to use, please check for the maximum temperature recommended for the brand you have and note that the sugar can get as hot as 150c/300f.

It only actually mentions about not using a non-stick pan, further down past the recipe, so easily missed.

It’s important to have it on a low heat as you do not want the mixture to burn. Next you are asked to add the Golden Syrup & to keep stirring until all the sugar has melted.

Now a tip for this is to oil whatever you are using to measure. This makes the golden syrup comes out easily. So if using a tbsp, oil that, or in this recipe, you are using much more. So there are a few options. Use your scales and measure out using a squeezy bottle of the syrup. Or if you have the Golden Syrup tin, let it pour into the pan, while over the scales. If using cups, oil the cup first (spray oil, baking spray, cake-release spray etc) and then it should pour easily into the pot. You can also use an oiled spoon to help guide or scrape it out.

You are then asked to bring the mixture to a gentle boil. It states to add a little bit of the mixture into a small ice-cold water bowl and if it hardens straight away then you have reached the required temperature. The recipe does not give a temperature for the brittle which I thought was very strange, but I knew it had to reach the ‘hard crack stage’ which is 150c or 300f.

I would rather use a sugar thermometer, so you know it is correct. As well as obviously the temperature, they also have handy markings on them like, the temperature for jam making, and the ‘hard ball’ temperature which is also known as ‘hard crack stage’.

But if you don’t have one then you could use this method.  The recipe also doesn’t say how long to boil the mixture for until it reached the correct temperature, but it took me 10 minutes. You have to be patient so don’t be tempted to turn the heat up or you will ruin it.

Next you were asked to remove the pan from the heat and add the peanuts immediately, stirring all the time. You then had to pour the mixture onto the lightly greased baking tray, levelling it out. I greased my baking tray while the mixture was cooking.

It didn’t tell you that you should immediately fill the empty pan with boiling water so that any residue will come off the pan easily when you come to wash it up. This saves so much scrubbing later.

Finally, the recipe said leave for 30 minutes for it to harden, but I left mine for an hour to be on the safe side. When it has set, run a knife round the edge and you will be able to lift it out. You can use a toffee hammer or a heavy knife to break the Peanut Brittle, but I managed to break it into pieces by hand.

***Don’t miss my table further down for ingredient conversions

My Thoughts On The Recipe

The recipe itself was good and the end result was what I was hoping for, but I did feel it lacked information. There was no stated temperature the mixture should be before you add the peanuts. It also didn’t give you any information on how to clean the saucepan and I know working with caramel how messy this can be, so always remember to put boiling water in it as soon as you empty it. As mentioned above there were no ounce or cup measurements given, or any process photos, just a partial close up shot of the broken Peanut Brittle.

The Size Of Baking Tray/Sheet To Use

There was also no mention of size of the baking tray/sheet to use for making the Peanut Brittle. I used a tray about 30.5×17.75cm (12×7”) in size and my peanut brittle was a little thicker than the original recipe’s photo. So I think anything up to about a 1/4 sheet pan size in the states and Canada would be fine.

The peanut brittle was amazing with a lovely golden colour. You could also add raisins, pecans, almonds or any other nuts you like. We all enjoyed it and will be making it again.

This would make a lovely gift for the holidays, or any special occasion. It will keep for 2 weeks in an airtight container if you weren’t giving as a gift. You could put in little cellophane gift bags or even in little sweet/candy jars like in the photos. This makes an ideal gift, as I find people really appreciate something homemade. And it’s a no bake recipe, so ideal for less experienced bakers.

My Rating Of This Recipe

How would I rate this recipe? Well, taking everything into consideration and what the recipe lacked, I would give a 6.5/10.

Please see below a table with conversions for the ingredients, and other information missing from the recipe. Check out Caro’s handy table of Conversions Of Common Baking Ingredient Measurements

So if you want to make this recipe, please see my notes & conversions, and Go to Tate & Lyle’s Peanut Brittle Recipe