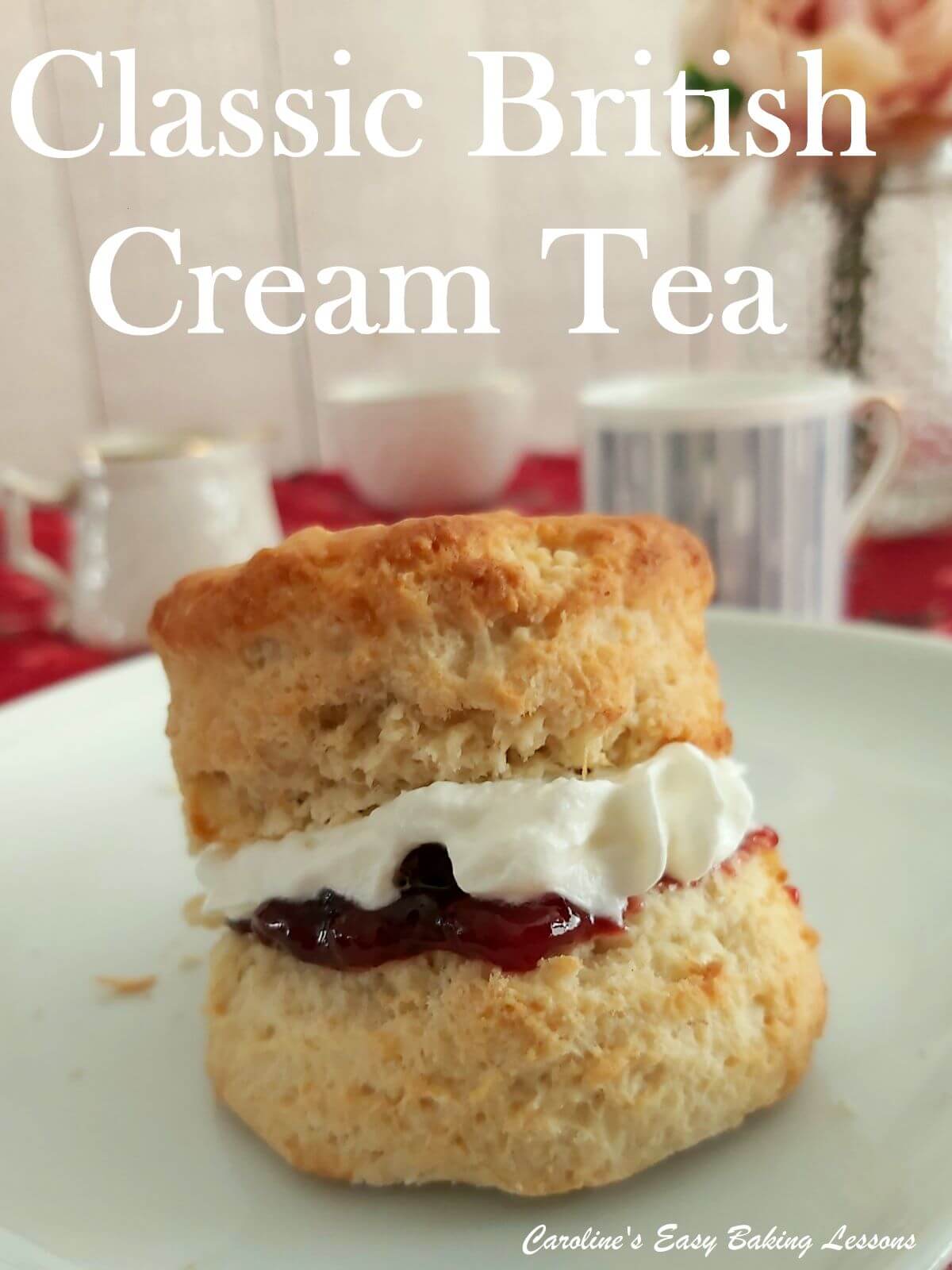 24th June this year, (2022) is Cream Tea Day. As a baker, food developer & food blogger, you need to keep on top of the many food days, weeks or months. There are lots! But it is a good opportunity to showcase not only classic British Baking, (which has become increasingly popular due to the Great British Bake Off being shown world wide), but also my own recipes and reviews.

Too many websites (and I mean the bigger popular ones), claim to be showing traditional bakes from other countries, but are often not traditional and are using different ingredients. Now I understand that not all ingredients are widely available in every country, & substitutions have to be made. But, they should not title them as ‘Traditional’ or ‘Authentic’. They should be listing the original food developer’s recipe (I always give credit), and mentioning what alterations they have made. So in other words it’s ‘inspired by’ or ‘variation of..’ a particular recipe.

Anyway, rest assured, all my recipes are authentic. I am Scottish and so my Scottish & British bakes are traditional, and my husband is Turkish. So, any Turkish bakes I post are not new recipes that have been influenced by European baking trends, but rather types of bakes that go back many many years, and many of them have been made by mothers (Annalar) on farms and in town bakeries.

What Is A Cream Tea?

Cream Tea is something foreigners consider quintessentially British. Point to note too, is that a Cream Tea, consists of hot tea and a warm scone with jam and cream (often clotted cream).

What Is Afternoon Tea?

Afternoon tea is different and consists of the same as a Cream Tea (tea & scones), but with the addition of other finger foods and some dinky little cut sandwiches without the crusts.

What can be more iconic to Cream Tea, than British Scones? Now I say British scones, not to be confused with the American version. British scones have much more of rise to them, and hence the structure and eating experience is lighter. (And no, they are not the same as American biscuits – proportions are different, so the inner structure & texture is different).

British scones have only a small amount of sugar, and it is there more for helping with the structure & preserving the bake. Because of this, they are not very sweet.

How To Serve/Eat British Scones

British Scones are always sliced in half and eaten with a sweet accompaniment. Cream & Jam being the most popular and traditional. Some use clotted cream in place of whipped double (heavy) cream.

There are debates in different counties, on which should be put first – the jam or the cream? I tend to put the jam first, as I find it easier to put cream on top, rather than the other way around. That said, I can’t eat a scone sandwiched together (my tiny petite genes). So I tend to eat separately so it doesn’t really matter for me. ** (See this pic above by my friend Diana)

Origin Of A Cream Tea

Another hotly debated topic is the origin of Cream Tea (alternatives names being Cornwall Cream Tea & Devon Cream Tea). It is agreed it originates from the south-west of England but in either the counties of Cornwall or Devon. Cornwall & Devon, argue this one out as well as the above mentioned, what goes first. The Devon method is to apply the cream first, then the jam. They also generally believe no butter should be added to these. Cornwall favours jam then cream and for some the addition of butter.

How To Pronounce ‘Scone’

Another debate concerns how to pronounce scone. I favour scone as in ‘gone’, but others say it’s pronounced like ‘own’ 🙂

History Of A Cream Tea

Cream tea actually didn’t consist of scones to begin with, but rather bread. And even when the scones came into play, in the Sixteen hundreds, it was the size of a tea plate, cut in half and sliced to be served. Not dissimilar to what Scots call a Bannock, these were cooked on a griddle until the invention of baking powder, and from then on were baked in the oven. Somewhere along the way, the scone as we know it now came to exist and be the norm.

The UK scone market worth is in the 8 figures band. So, it’s definitely something that will continue on for a long time yet.

See here a pic of scones made by my youngest son for Mother’s Day – he wanted to make square ones (they are always round), but I let him, as he always manages to make ones with a great rise 🙂 )

Here’s my Classic scones recipe, with thorough instructions, tips and an almost real-time video tutorial I used for a Facebook group bake-along weekend. All you need to know for a successful rise – Go to Classic Scones recipe

This is a variation on my classic scones recipe, with the addition of some flavour in the form of spice & texture from cranberries – go to Cranberry Spiced Scones recipe

I also have a savoury version but these wouldn’t be part of a Cream Tea. You could however, serve for Afternoon tea, or for a picnic. Go to Cheese Scones Recipe.

Which Tea For A Cream Tea?

So what tea should you serve with a British Cream Tea? Or even an Afternoon Tea or High tea? Well as mentioned, the Cream Tea is also known as Cornwall Cream Tea & Devon Cream Tea. And people will have their particular favourite brews. Here is a link to a site that explains some of the popular types of teas to serve – 8 Top Teas For Afternoon Tea By 31 Daily.