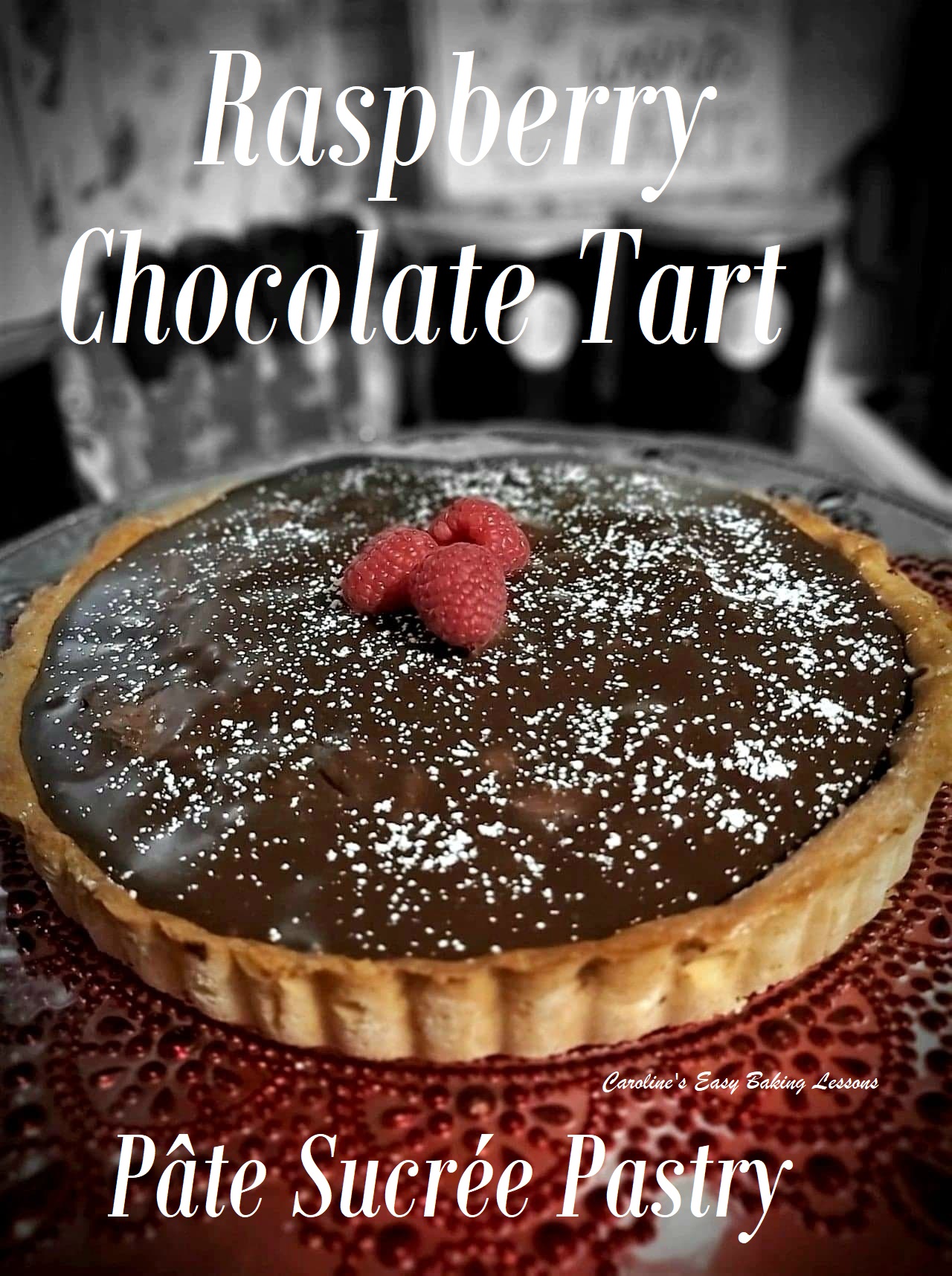 I got this absolutely brilliant book from the charity shop (thrift store) for £2 (that’s like $2.50), and it’s called ‘Pastry’ and by Michel Roux.  In case you don’t know, he is ‘the’ master of pastry and French baking.  This is Michel senior and his son Michel junior, you might have seen on Masterchef: The Professionals.  It’s a great book that explains with full colour photos, all the different types of pastry and even brioche dough.  I made a point of making my way through this book, that also has wonderful and different recipes to use all the pastries for.  My first effort was Pate Brisee, and I made a lovely cheese and broccoli quiche from that (more about that another time, or check out my video on Youtube).  But this time I fancied trying the Chocolate & Raspberry Tart.  I mean why wouldn’t you, after seeing the picture of it?

A NOTE ON EQUIPMENT

The recipe is for a 20cm (approx. 8″) flan tin, that I didn’t have and could not find in time, so I used a 24cm (9.5″) tin and increased the amount of ingredients, by using my handy convertor (the increase factor was 1.57. I don’t have my increasing calculator on this new site yet, but you can read article on how to decrease a recipe, and just use the same method, but increase by multiplying all the ingredients by 1.57) The recipe calls for 240g of Pate Sucree for the base of the tart, and the book’s recipe for this makes 520g, so if using the 20cm tin, half would have been enough.  I just made the bigger amount and kept the off-cuts for trying mini tarts soon.  I wrapped well in cling film/plastic wrap and labelled it before placing in a food bag and freezing it.

A NOTE ON THE INGREDIENTS

Since my husband did not bring me the correct amount of raspberries for the recipe, I also used some black cherries I had in a tin.  I just kept a few raspberries for decoration and halved the others and filled across my empty tart tin, to see how much cherries I would need.  In the end I think I used too much, but more on that later.

The first job was to make the pastry base from a pastry called Pâte Sucrée. In some sites online they will refer to this as a sweet shortcrust pastry. It is similar to UK sweet shortcrust, but the proportion of ingredients are not quite the same. So it bakes off like a cross between our shortcrust and a biscuit (not US biscuit).

I went with the recipe but used by hands for forming the dough, as I find using a food processor can make the pastry tough. And to be fair for a review, I wanted to give it the best possible chance.  But instead of making on the counter/worktop, I used my wide bottomed bowl and it worked fine for me.  I was able to add the flour and make a well in the middle, to which I added the sugar, salt and butter.  You then mix these 3 ingredients only, with your fingers, before gradually working in the flour.  Once you have what the book refers to as a ‘shaggy dough’, you make a well again and add in the eggs, working into the mixture like before.  The dough is then kneaded a little until shinny and smooth.  Be careful not to over work the pastry.  Only work it until it’s smooth.  You then wrap in cling film/plastic wrap and chill for 1 – 2 hours before use.  Oh and a point to note is I had to add maybe 3 or 4 extra tbsp of flour to get it to be manageable.  So perhaps small eggs would have been better.

To roll the pastry out, I do so between 2 large sheets of baking/parchment paper, dusted with some flour.  It saves on the mess and you can scrape off any pastry and re-use the paper.  Now this part took me quite some time, mostly because I forgot to cut off some of the dough and had to roll it out really big.  I used a £1 coin to get to the 2mm (1/12 “) but I suspected the middle of the dough was thicker. (And pics later of the pastry cut, reflect this).  Anyway, once ready, I used my rolling pin to transfer the pastry dough to my greased tin (I used Great British Bake Off/Baking Show winner, Nancy’s lining paste again for this.  It’s stored in the fridge, ready for use at any time – make your own lining paste.).  Once in the tin, I used a large ball of excess dough, to gently push the pastry into the shape of the fluted tin, before ‘docking the base’ (making holes in the base of the pastry with a fork to let steam escape and prevent a soggy bottom! 🙂  The tin is then placed in the fridge for 20 minutes, before baking, lined with foil and dried beans for 20 minutes.  After this, it was baked at a slightly lower temperature for 5 minutes empty.  Now the recipe didn’t say to use an egg wash, but despite the foil covering the pastry edges, it was already browned after the 20 minutes, so  I brushed some on, as well as on the base.  The base however was still very soft and pale after the 5 minutes, so I in the end baked for an additional 8 minutes, and cut out a circle in the foil, to cover the crust and prevent too much more colouring.  The recipe also advised on lifting off the tin ring for the cooling period, and this was easy to do with this type of loose bottomed tin.

Once the tart was nearly cooled down, I prepared the chocolate ganache.  The cream (heavy, whipped or double) is brought to a boil and then removed from the heat, before adding in the well chopped chocolate and liquid glucose and whisking continually until smooth.  At that point the cubed butter is added gradually and again whisked until smooth.

The fruit is then laid on the base of the pastry tart.  I positioned the raspberries around the outer edge in a ring (not sure entirely if any of this would be visible when sliced), in an attempt to make as neat as possible.  The remaining raspberries I mixed with the chopped cherries and positioned in the centre of the tart.  I suspect now (with hindsight), that I added too much fruit, and should have been flatter and with more gaps, for the ganache to get into, but more importantly to get a smooth top.  I then spooned the ganache on around the outer edges first and then filled in the middle.  And I filled as much as possible without the chocolate ganache dripping off the edges.  It is then left to cool and chill for at least 2 hours.

Well my boys were too impatient, and so when cut, it didn’t give a nice definition between the fruit and ganache.  See the photo of a slice.  It was also very hard to cut the base – I over-baked it for sure.  So a much shorter baking time next time and also to roll thinner, as it was thicker in the centre of the dough as I suspected 🙁  But because of these factors, it was much easier to just lift up and eat than use a dessert fork.  In the future, use less pastry so it can be rolled out thinner easier, and get one of those special rolling pins with the rings on the end that help you keep the thickness to what you want.  Also, the top, although a nice shiny glossy finish, was not flat.  I saw other people on the internet had made the same recipe and theirs were the same as mine.  So I think a little less fruit and push them all down flat before adding the ganache would have been a useful thing to do.

“How did it taste?” you ask.  It was lovely, and although I used all dark/bitter chocolate, with the cream it wasn’t too heavy and not too sweet.  The contrast with the raspberries was perfect, but the cherries were a little tasteless.  So all raspberries next time 🙂 And the Pâte Sucrée pastry was nice and very biscuit like and not too sweet at all.  I had with some cream and it finished it off perfectly.

The day after, I took some more pics, to show how much better it would cut and if the layers would be more visible.  And yes, it was a lot better and I actually had placed it in the garage over night, with my glass cake dome on top, which all gave it enough cold to set better.  The base had softened a little too, which was nice.

So how was the recipe?  Well lots of pics to help you make the pastry, but not any for making the tart and if there had been, for example for the layering of the raspberries, a flatter smoother finish could have been achieved.  There was also not any ounces, cups, or  Fahrenheit  temperatures, in the book for US & Canadian readers.  This all said, I would still rate it a 7 out of 10 and that’s on the higher end of my scoring.  No pics for forming the tart,  definitely brought it down.  I would highly recommend any of Michel Roux’s recipes to be honest and if you want to make this one, just take a note of the points above first.  I also did a little video of me making the Pâte Sucrée pastry dough, and the tart for your reference.

Watch my video below, of making the Pate Sucree pastry, in real time, to show you how to handle the dough.

Here’s a link to the recipe online with additional measurements –  Go to Recipe.  Please note that you will only need half the amount of pastry dough to make this tart.  So either half the ingredients, or save the rest and freeze for later.